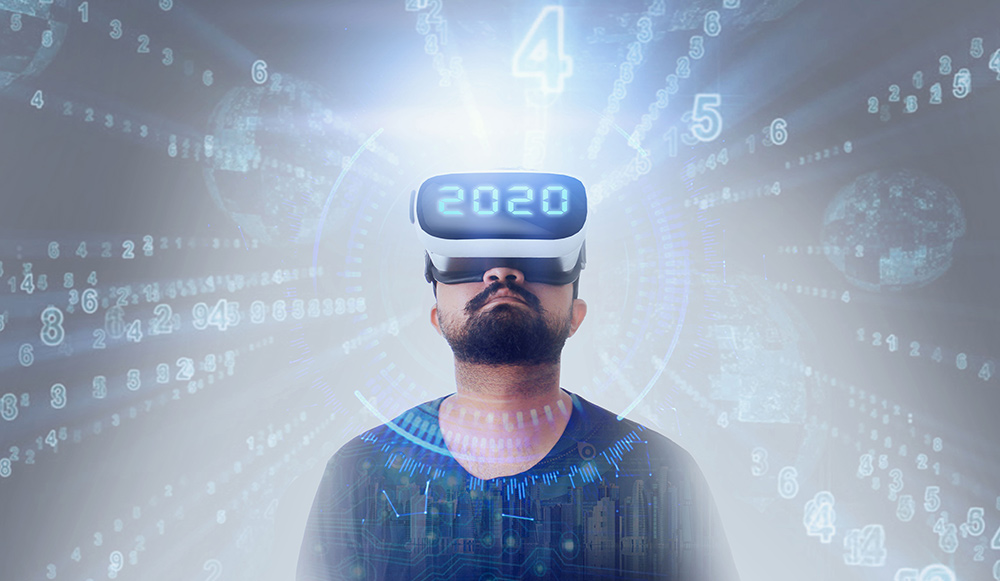 On 5th January 2020, our first Sunday morning church gathering this year, I shared about 2020 vision – vision with perfect clarity. I said that morning that we might wish we had 2020 vision of what this year – and beyond – may bring. So how are we doing almost exactly halfway through?

As I shared something of a church vision for the year ahead that first Sunday of January and we sang, ‘Here we are, standing on the edge of something new’, I had no idea how true that really was, and how much these plans would be impacted by events outside everyone’s control. Neither did anyone else.

On the morning of 13th December 2019, after he and his Conservative Party had a landslide General Election Victory, Prime Minister Boris Johnson said to his party colleagues, ‘Let’s get Brexit done’ – and in typical Boris style he added, ‘but first, my friends, let’s get breakfast done’. He, and they, had no idea what was about to begin to unfold that month in far-away Wuhan, China, that would so drastically change their focus and everyone’s lives. Six months into 2020 and Brexit’s scarcely been mentioned.

The dreadful Covid-19 pandemic has impacted everyone, even if in varying degrees. There are ongoing issues of how the government should have responded. Some may believe that Boris is doing a good job under the unprecedented circumstances – while others may very well believe that he and his colleagues should be immediately charged with at least criminal negligence.

Alongside this, the appalling killing of George Floyd in the USA has ignited a bonfire. In the UK, it’s focused on how we treat Britain’s past acts of history, and it has significantly highlighted the reality of institutional racism in such a way as perhaps never before. These issues of culture, race and history are complex and deeply felt. Much is changing in 2020.

Back on that 5th January morning, I shared our theme verse for the year 2020 – All authority in heaven and on earth has been given to me. Therefore, go and make disciples of all nations, baptizing them in the name of the Father and of the Son and of the Holy Spirit, teaching them to obey everything I have commanded you. And surely I am with you to the very end of the age’ (Matthew 28:18-20).

Our plans –as individuals, families and church, may have changed. But this commission hasn’t. The going bit has not been easy for many of us at this time. And I I wonder how you feel, as a committed follower of Jesus Christ, about your calling to make disciples in our rapidly-changing society and world? What does this look like? It will differ from person to person, but some factors are true for all of us.

One is that, as ever, no matter how circumstances change, we are always between two opposing power systems – the Kingdom of God and the Kingdom of this World. The Kingdom of this World represents those systems, structures and organisations of politics, economics and power that owe no allegiance to God. They set their own agenda and goals and seek to gain them with the aid of political persuasion, finance, and the media – even, if necessary, with force.

But the Kingdom of God is very different. It’s a countercultural movement across all nations, made up of those whose primary allegiance is not to any power system but to Jesus Christ. Sometimes, the Kingdom of this World may openly and visibly oppose God’s Kingdom through abuse and persecution. Perhaps more frequently – and more dangerously – it may disguise itself in the language of God’s kingdom and, by doing so, seduce God’s followers into supporting it.

It’s a long, tough battle and it isn’t over yet. That final victory – guaranteed by the victory of the cross – will only occur at the coming of Christ when, the ‘Kingdoms of the World’ will become ‘the kingdom of our Lord and of his Messiah’ (Revelation 11:15).

As Christians, our ultimate loyalty is to God’s Kingdom. We will inevitably be involved in the Kingdom of this World – we may earn a salary from it, we may even hold power within it, but when it comes to any conflict between kingdoms, we belong to God. We’re in the world, but not of it. We may be mocked or persecuted for standing against the Kingdom of this World, but we have no alternative. To call Jesus ‘Lord’ means that there can be no other lords and no other loyalties.

Our values come from God’s Kingdom too. One of the problems with earthly kingdoms is that they set their own rules and demand that they are followed. But it’s the values of God’s kingdom that should guide us in how we live, and what we do and don’t do. At times we will need to resist pressure to conform, even if it is dimly viewed, and other times be radical in our positivity. Jesus has instructed us to be salt and light, and continue to remind ourselves that as the people of the Kingdom of God, we have a different allegiance, values and destiny.

Jesus had compassion for people because he saw them as harassed and helpless, like sheep without a shepherd. He then said, ’the harvest is plentiful but the workers are few.’ So yes, we do live in rapidly changing times, but our call is to be whole-life missionary disciples. It’s about being transformed in an ongoing way and being agents of transformation. An ambassador is an official representative of, and spokesperson for, one country, living in another – or – we might say- one kingdom living in another. We’re called ambassadors of the kingdom, as though Jesus is making his appeal through us (2 Corinthians 5:20).

We have the opportunity to tell/show people how the gospel of a crucified and risen Lord shapes our everyday life – that even though we’ve far from got it all together, it really makes a difference and is transforming us. So if someone’s primary issue is that they cannot cope with this stressful job, and you know the gospel and it hasn’t helped you in the slightest to cope with that same pressure, then you are naturally much less likely to share this gospel with that person. Jesus gave his life that all of life might be transformed.

That was the point about his parables of the mustard seed and the yeast. The yeast in the bread spreads its influence throughout the whole loaf/batch. Jesus’ picture is of total transformation – as in when he comes into our lives by his Holy Spirit and seeks to transform every aspect of our beings – our mind, heart, will, emotions, priorities, behaviour. Yeast doesn’t just spice the dough up – it turns it into something altogether different. It’s an agent of transformation. It looks good, it tastes good, and it does you good.

Whatever pain and challenges we have now and that we may see all around us and our world,   we have a vision that is not hopeless, but hopeful. It’s good to remind ourselves that our ultimate destiny is God’s Kingdom. For all their power, earthly kingdoms are limited and will not last. Where now is Nebuchadnezzar’s Babylon now? Where’s the Roman Empire? And Hitler’s Third Reich? And Stalin’s Union of Soviet Socialist Republics?

The Bible promises us that death is not the end, but that we all live on beyond it to stand before God. There, if we have handed our lives over to Christ and through him been reconciled to God, we will be welcomed into a joyous eternity. This promise of an unending future glory for those who have come to Christ transforms our life in the present.

This life may claim to be everything, but with this vision we can now realise that it’s nothing more than a brief prelude to the real thing. Far from being the end of the story, for those who know Christ it’s just the beginning. However dark our days and however difficult our lives, to know Christ is to know and have hope. As the New Testament says, ‘We’re receiving a kingdom that is unshakeable’ (Hebrews 12:28).

This is the wonder and glory of God’s plan in Christ. It is not a partial salvation – it’s not an interim solution. It is a once-for-all sufficient, redemptive sacrifice that promises the renewal of all things. Yes, marvellously Jesus came to die in our place, to satisfy the wrath of the Father, to take away the sin of the world, and to defeat death and Satan. But he also came to bring abundant life – not an ethereal, disembodied life in the Spirit, without reference to the everyday realities of life in the flesh, but an abundant life that means living as material flesh and blood human beings.

In January, I said, ‘May we not just see Jesus as a historical figure or some ‘great moral teacher’ but as the one – the only one – who can give us those things the world cannot give – value, hope and purpose. That will be the very best sort of 2020 vision!’ How much more does it seem true at the end of June.

Listen to our Harvest Thanksgiving service led by Judith. Discover the work two organisations we support are doing to alleviate poverty and protect asylum seekers.

Church Still Under Pressure – Be Ready

The third instalment of the series focusses on the third chapter of the second letter to the Thessalonians calling on Christians to work hard, pray and trust in the Lord

Here I Am. I Have Come

In the last instalment of the Church Under Pressure series, we take a look at Paul’s to-do list to the Thessalonians and examine how we can make it ours.

Church Under Pressure – Return of The King

In the fourth part of our Church Under Pressure series, we look at what will happen when Christ comes again.

In this third part of our Church Under Pressure Series, Paul writes to the church exhorting them to live in purity and choose right from wrong. This meant that we would be pleasing to God and He would be able to mould us as He saw fit to do His work.

Church Under Pressure – The Best Kind of Prayer

Church Under Pressure – Grace and Integrity

The first in our series of sermons about the early church. In this message we learn about the grace we have received and the importance of integrity, being the messenger.

The Father You’ve Been Looking For

This Father’s Day, Steve talks about the good Father who looks out for our every need but doesn’t always give us what we want.

Podcast – A Place of Refuge

How can you escape the pressures and worries of the current time? This message is all about how we can find refuge in God in difficult times and how prophets and kings coped.